The Merion Evanston to Introduce Encore Evanston Chorale to Area 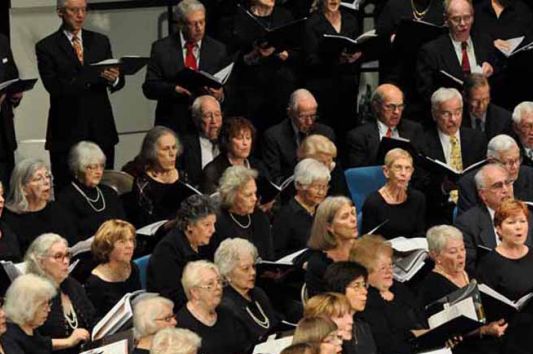 “Research shows very convincingly that when older adults are engaged in artistic activity under the guidance of a professional artist, the results are astounding,” said Jonathan Miller, artistic director and conductor of Encore Illinois. “Choral music specifically is at the top of the charts. We’re social animals, and choral music is a fabulous social activity.”
Later this month, Miller is introducing Encore Evanston at The Merion in Evanston. An affiliate of the national Encore Creativity organization, the program seeks to enrich the lives of older adults by offering an opportunity to perform with their peers, in a professionally conducted choral group.

Miller became aware of Encore, when Jeanne Kelly, founder of the national organization in Washington D.C., called him to place a large order for copies of original music he’d written, that had become a YouTube phenomenon. “In 2011, I’d composed a mashup of ‘Jingle Bells’ and the ‘Hallelujah Chorus.’ Within six weeks of posting it
on YouTube, it had 30,000 hits. It brings the house down every time,” Miller said. Having until that point enjoyed modest commercial success, Miller added that Kelly’s order for more than 500 copies caused him to “sit up and take notice.”

In addition to wanting music for all of her singers (now over 1,000 in 19 neighborhood choruses around the D.C. area), Kelly told Miller that she planned to put 275 singers on stage in the lobby of the Kennedy Center to perform his composition. “I told her that I was going to be there for the performance. My wife and I flew out there and loved the show. It was fabulous; like nothing I’d ever envisioned. She’s a visionary. I’ve stayed in touch with her through the years,” said Miller.

Kelly had founded Encore 15 years ago, as a way to provide an accessible artistic environment for adults ages 55 and over. “Jeanne told me she was starting to create affiliate programs where others around the country wanting Encore could start one. She’s made it really really easy to affiliate. I knew I wanted to become involved,” said Miller. He became an affiliate. “My dream is to have 300 people singing in five chorales by spring 2017,” he said.

“Music is integral to The Merion,” said Margaret Gergen, director of leasing at The Merion, a luxury rental senior community in downtown Evanston. “We host countless musical performances and draw large audiences from throughout the area. It is a natural next step to facilitate opportunities for our own residents, as well as other older adults from around the community to be the performers. We are lucky to have someone of Jonathan’s caliber leading the charge.”

Miller is a renowned choral director, best known to Chicago audiences as the founder and artistic director of award-winning Chicago A Cappella, a role in which he continues to serve. Miller hopes his track record with that ensemble will draw people wanting to sing under his direction. “When people who know my work hear I’m conducting a choir that they can sing in, I would love it if it becomes a win-win for everyone.”

People 55 and older from throughout the area are encouraged to join Encore Evanston. What will make the chorale especially appealing is the fact
that it’s very accessible. “This is absolutely the opposite of intimidating or stuffy. Encore draws lifelong choral singers and those who haven’t sung in a while, as well as people who’ve never sung in a choir and want to give it a try. Some people wonder if they have to be able to sight-read, and they don’t. Many people learn by ear, and our learning CDs are superb tools for that learning style. Also, Encore permits singers to rehearse and perform while seated, if that is best for them.,” said Miller. Convenient, daytime rehearsals will be held weekly on Tuesday mornings at The Merion. The pilot session is six weeks.

The repertoire focuses on well-crafted, four-part arrangements of generally lighter and eclectic repertoire. “We try to avoid duplicating what people already sing in church and synagogue choirs. We’ll start with ‘Chicago, That Toddlin’ Town,’ which I’ve arranged. We’re doing an up- tempo spiritual, ‘Rockin’ Jerusalem,’ a slow ballad called ‘I Cannot Count the Stars’ by Eugene Butler, and a medley of ‘Shenandoah’ and ‘Deep River.’ Our finale will be the Beatles’ ‘When I’m 64’, an Encore tradition,” said Miller.
Miller said that for him, this initiative is “all heart. It’s great to be able to take my musical skills and create a community of singers. Choral music has brought me great joy in my life, and I know I was put on this earth to share that joy. This is another way for me to do that.”
As Seen in The Daily Herald